A Case Study: Brands Are Seeing a Huge Increase in Music Downloads Through Influencers on TikTok

Have you ever heard of the tosha__ptp profile on TikTok? These two extremely creative influencers have managed to acquire unbelievable popularity in no time with one simple trick that could possibly be the true goldmine for the music industry and music promotion purposes. Find out more about them in our case study here, at Brybe.com.

Who Are These Influencers?

Tosha__ptp are two young influencers who have managed to gain extreme popularity in a short period of time in a very specific way – by using a single song recorded in hundreds of creative places (recently also requested by their viewers) while dancing to their theme dance in an utterly creative and catchy way. These two influencers were using the same music over and over again in their videos, and, to be honest, it is so catchy that many of our employees have downloaded the song while we have started working on this case study. The list of the places inside of which they did their dance is almost endless – and it keeps on growing every day. And not only that – they have also used multiple themes like, e.g. Star Wars, to make it all even more interesting and memorable.

How popular did they get? Well, let's get to the numbers that are crucial for every case study:

3.9M followers and 74.5M likes are the numbers that deserve some respect – which, on the other hand, also prove that TikTok is a very specific platform, as these influencers have less than 100K followers on Instagram and are not-so-popular on other social media channels.

Each of their posts has 2.3M views on average – although their videos are not always so popular, while plenty of them exceed many millions of views with the record-breaker hitting over 20M views. 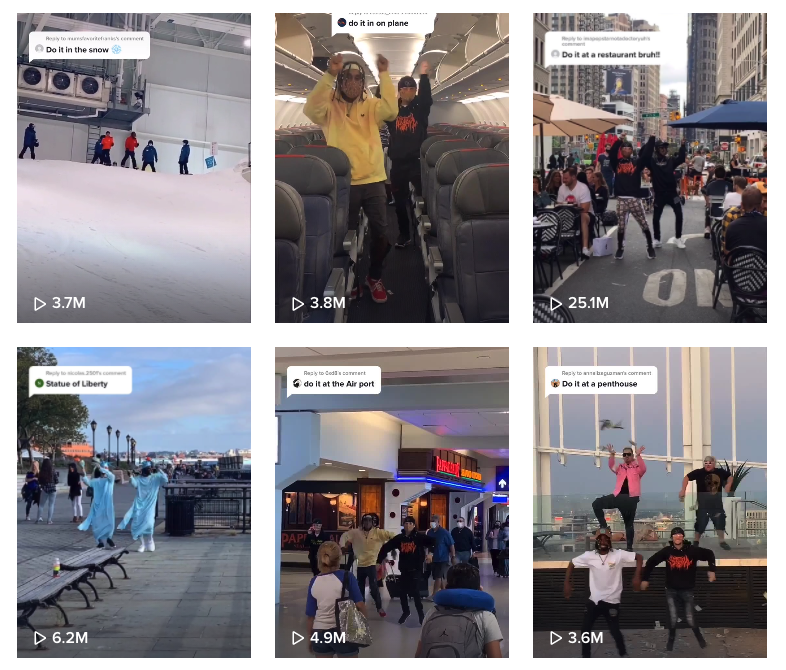 Their most engaging video achieved almost 20% of engagement rate, while their most commented one has a stunning number of 32K comments! 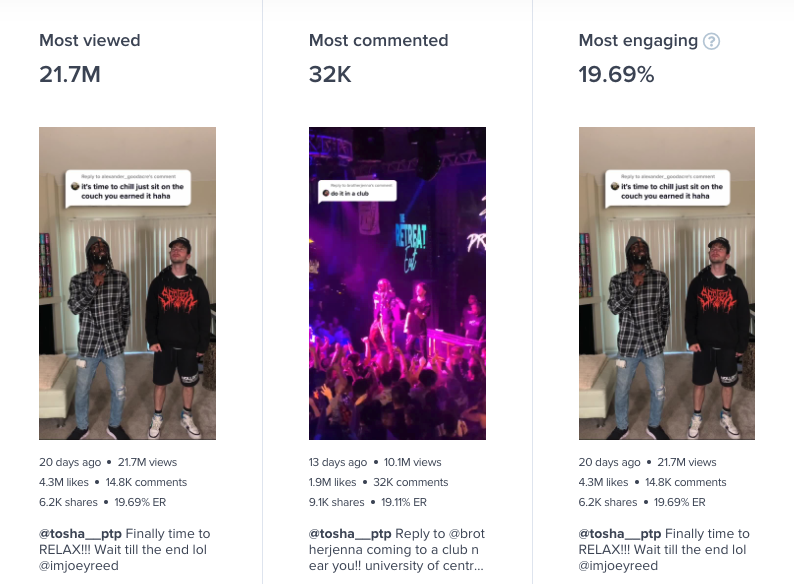 Nearly 80% of their videos have their theme song and they can boast of over 60% of positive comments on their profile – which is a huge success on TikTok, which, like every other social media platform, is full of haters.

Their videos are mostly liked by women (over 60%) and the majority (36%) of their viewers come from the United States.

Last but not least comes their ER/post, which is almost 5% – this and many other performance statistics can be viewed below.

If you took a moment and watched some of the TikTok videos of this artist, their title song is probably running around in your head now – and that was the intended effect of these creative influencers. The song Wrap Me In Plastic (Slowed Down Version) - CHROMANCE & Marcus Layton has become extremely popular only thanks to their clips and can be found in millions of views on YouTube alone – and yet this is only the beginning. There have even been a lot of compilations and 1-hour versions of this song for its biggest fans and people who can't get this catchy song out of their heads – we have to admit that this simple trick, which has been used in traditional advertisements for many years, is gaining much more power thanks to TikTok, which we will refer to in the next paragraph that sums up the whole case study.

The conclusion is simple: influencers like Tosha could be a true goldmine for the music industry. This time the promotion of the song happened unplanned and naturally – the influencers just wanted to gain popularity and become the name on TikTok, so they chose the song that they have started using as their theme and made something wonderful with its use. But imagine what would have happened if a giant from the music industry would have hired someone like them to promote a brand new song of a rising music star? Track records using the proper marketing campaign combined with influencer marketing of content creators like these could make their song a next worldwide hit – and presumably with the budget much, much lower than they would have normally spent on a regular promotion. We can't wait until someone will decide to run a similar influencer marketing campaign on our influencer marketplace – we keep our fingers crossed at Brybe and our speakers turned up to the maximum while waiting for the new global music phenomena!